Japan’s Sharp has developed an 85-inch LCD (liquid crystal display) panel with resolution equivalent to 16 times that of today’s HDTV panels. The screen, which is only a prototype, was developed for Super Hi-Vision, a next-generation television system currently under development in Japan. 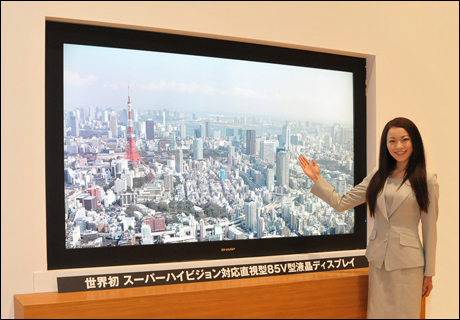 Picture above obviously doesn’t illustrate anything more but the size…

At 7,680 pixels by 4,320 pixels, Super Hi-Vision images will have four times as much detail horizontally and vertically than the best of today’s HDTV images.

The system is being developed by Japan’s public broadcaster, NHK (Nippon Hoso Kyokai), and demonstrations of early prototypes have shown a very detailed image with beautiful colours. The images are so good, the viewer can feel immersed in a scene in a way not possible with current 3D TV technology.

The first public trials of Super Hi-Vision are due to start around 2020 and the development of the LCD screen is the latest in a number of steps towards that goal.

Because of the large amount of detail in each Super Hi-Vision image – each frame is equivalent to a 33-megapixel picture – highly complex cameras, mixing and switching systems, and recorders and transmission equipment need to be made to handle the huge bandwidth of the video image.

Have we reached the end of plasma panel display production?